599 Days Is a Long Time to Go Without a Vacation

Five-hundred-ninety-nine days. That’s how long it had been since I’d traveled anywhere. And I mean anywhere.

When the pandemic began, I closed my front door to the world, shut it with a thundering thud. And even when things improved, I kept it sealed like a fairy-tale princess locked away in a tower. Maybe I’d forever keep it closed—a perpetual shut-in, isolated, unaware that time moved on, waiting. Forever.

In the before times, I used to go places, meet people, do things. I’d spent Thanksgiving 2019 in Macau, holed up in the Champagne Suite at the Parisian. Ooh la la. It was luxe, all right. I stared at the “Eiffel Tower” from the hotel shower—through floor-to-ceiling windows; indulged in a Michelin-starred Indian feast at the Golden Peacock—the finest Thanksgiving meal of my life, thankyouverymuch; stuffed my belly with egg tarts until I needed to be rolled round in a wheelbarrow; had the best damn massage in all of China, thankyouverymuch; won big at baccarat, lost big at baccarat—easy come, easy go.

Returning on December 2, I foolishly began planning my 2020 travels: Switzerland (Spring), Portugal and Morocco (Summer, weather be damned), Thailand (Autumn). I’d go places, meet people, do things. Well, we know what happened. No point in rehashing the details. As for me, I stayed home with my wife and watched most of the Real Housewives franchises: 1,113 episodes, roughly 797 hours—the equivalent of 33 days without sleep. Nothing but pure, raw, uncut Housewives pumping through the veins. No travel. Easy come, easy go.

But after 599 days, I couldn’t take it any longer. It’s sort of like going without sleep, without dreams. And, after all, traveling is a bit like entering a dream state. It feels like you’re living an imaginary life, where everything is slightly different from reality. Just as sleeping and dreaming reboot the brain, travel can cleanse the mind, give it a scrub, allow it to function. And after 599 days of sleeplessness, I was pretty damn tired.

So, a getaway! That’s it, a getaway. A quick one. A jaunt. My wife and I missed the Great Summer Road Trip of ’20 (fear and Housewives kept us home) so a road trip would do. We’d plan a short road trip. But then came Anxiety. “Leave the house?” it whispered (it usually starts with a whisper). “You’ll die immediately,” it screamed (it usually ends with a scream). Now I’m an anxious boy by nature (see: Exhibits 1, 2, and 3), so I’m used to my mind spinning tall tales—it sometimes keeps me out of trouble. Sometimes. But other times, Anxiety locks me in a prison for 599 days. “Not this time,” I said, fists on hips, pretending to be an action hero.

I’d heard about a little spot in Palm Springs—a wee tiny hotel, only 11 rooms. “It’s perfect, ain’t it?” My wife agreed, so off we trundled from Los Angeles. It’s called Dive Palm Springs, which is awfully ominous-sounding—no one wants a dive in a pandemic—but the flashing neon sign of a diver tells you what the hotel’s really about. Like all of Palm Springs—it’s always, always, always about the pool. And this hotel has a sweet little pool, set amid gardens and grottos, a relaxing thing kept a perennial 80 degrees, which is a helluva lot cooler than the 110 outside.

So, off we puttered through the desert, blaring Serge Gainsbourg. We wanted to get in the mood. The Dive is a French-themed auberge—South of France, so says the marketing materials—it’s their thing, their vibe, their je ne sais quoi. Christian Lacroix even designed the wallpaper. And I like a French-themed hotel: from Paris in Macau to Palm Springs à la Saint Tropez—all in the course of 599 days.

The GPS confused the hell out of me. It kept trying to take me to a place called Colt’s Lodge. Sounded like a seedy little dive—an actual dive. Not THE Dive. Turns out THE Dive used to be a dive—Colt’s Lodge. That was a couple years ago before it was bought up, revamped, and Cote d’Azure’d. Alas, Uber, Lyft, and my GPS haven’t been notified of the transformation.

We arrived at an inauspicious little place. No valet. Thank the good lord Dr. Fauci—the idea of another person stepping into my car and breathing out their pox had vexed me for three hours. We parked. So far, not too scary. We entered through a gate and into our weekend ooh-la-la Shangri-la, seeking out a front desk. The hotel is a converted motel, with an outdoor promenade winding its way around the L-shaped building. The lobby was locked away behind a glass door. A sign asked us to knock. Good, we didn’t have to go inside. The front desk manager came outside, she gave us some rose—bless you, child—assured us that everyone who worked there was max vaxxed—hallelujah!—and showed us to our room. 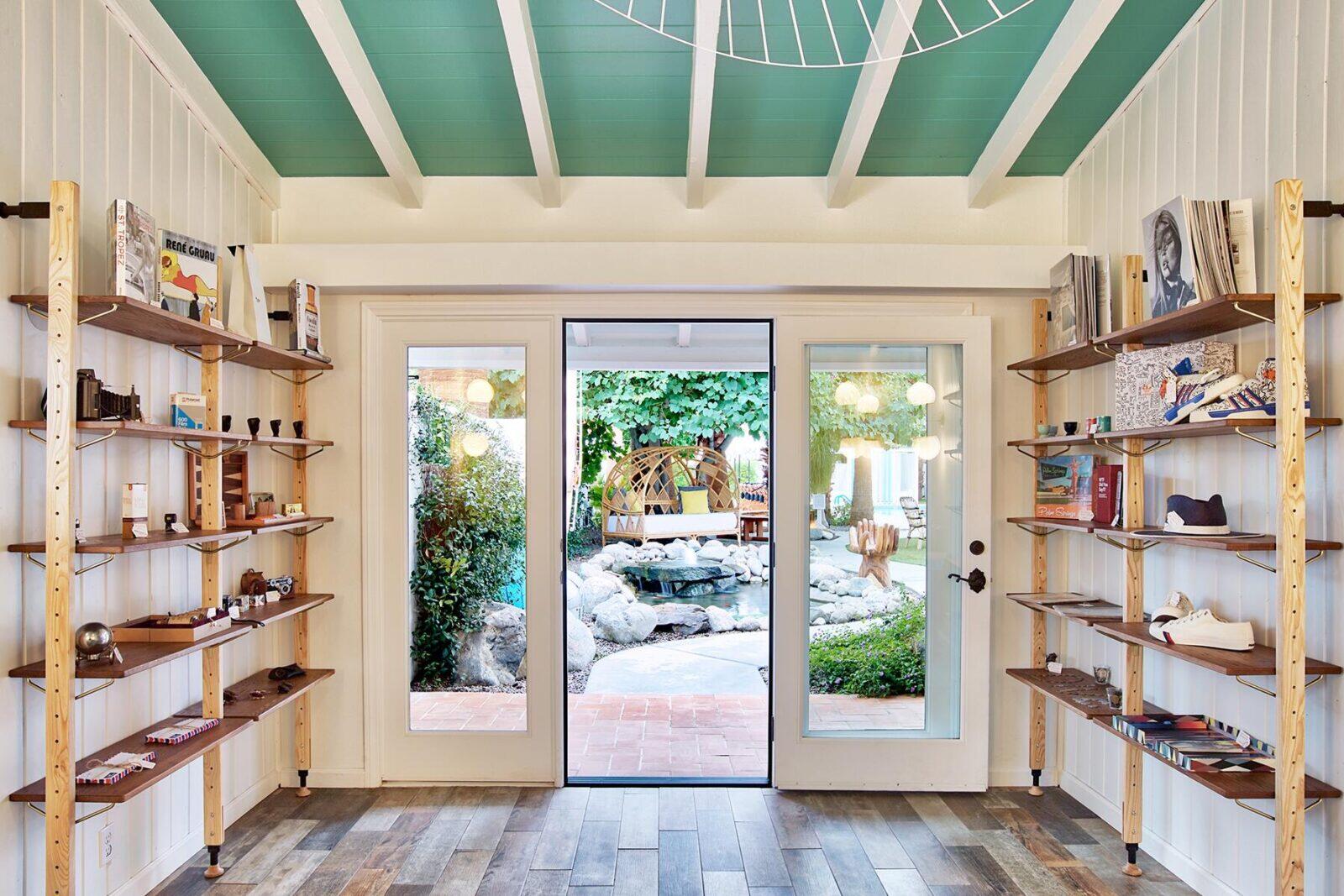 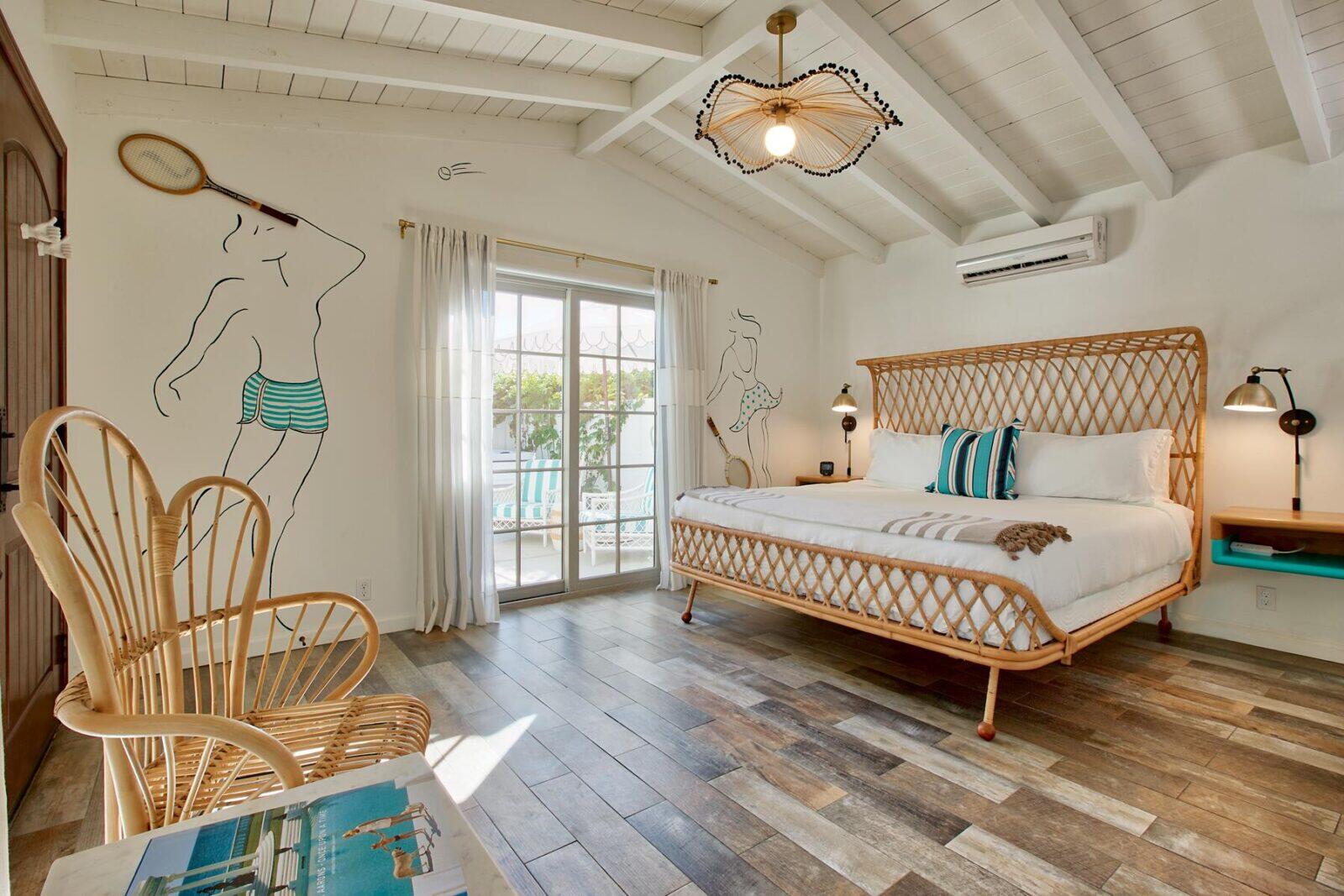 1. The small lobby that you, thankfully, don’t even have to go into.Brian Ashby 2. One of the Dive’s 11 Cote d’Azure’d rooms.

Anxiety fled my body faster than the sweat rushing out of my pores. It was 3 p.m., 110 degrees. The air conditioning almost knocked us down. The room was sweet, cute, Francophilic. But above all, chic (c’est la vie). But a problem. Quelle horreur! “There’s no television,” I said, looking at the front desk manager who stood just outside the door. I looked to my wife, she looked to me. Telepathically we said, “But how shall we watch Real Housewives?”

“No,” said the front desk manager. “No television. But—” there was a but! “There’s a record player.”

Zut alors! For the love of Andy Cohen, what was happening?! Then I realized: Here in the desert, like so many before us, we were drying out. Rehabbing it. Trying to shed the pandemic people we’d become—trying to remember the folks we used to be in the before-times. People who left the house, walked among strangers, forewent Housewives.

“All right,” I said, trying to remember who I was without Dorinda, Kandi, Margaret, LVP, and the Grande Dame of Potomac. “That’ll do.” I wept inside. My wife wept outside. We wept together, inside and out.

Then we got drunk and went to the pool.

Aperol Spritzes will cure anything. (Well, not alcoholism.) We met Kevin, who hung out behind a split-door next to reception. I knocked on the door, he swung open the top half, and there he was, basking in his A/C. Gives you a real speakeasy feel. Order up. He makes a mean Aperol Spritz. We ordered a late lunch. Kevin’ll cook it. Kevin can do it all! I’m not lying when I say: he made me the best damn scrambled eggs (ham and gruyere) I’ve ever had. I liked it so much, I ordered it again the next day.

We sat around among—I kid you not—strangers. Real, honest-to-goodness, actual strangers. Never met these folks in my life and yet here we were, among them. Hadn’t done that for hundreds of days. There were at least four of them sitting about 20 feet away. They breathed the air. We breathed it, too. And, despite everything that Anxiety shouted in my ear, we lived to tell these wild tales!

Besides Kevin, The Dive doesn’t have a restaurant and Kevin leaves at 6, so we had to head out. “But the gates of The Dive protect you from even more strangers outside!” Anxiety whispered. Yes, here at The Dive, we’d discovered new safety. “Out there, beyond the walls, in the wilds of Palm Springs, YOU WILL DIE!” Anxiety screamed, the bastard.

But, we needed grub and let’s be honest, Anxiety ain’t so bad when you’re soaked in Spritzes. So, we changed and, despite my misgivings, got into an Uber (Oh la vache!). The Uber picked us up at “Colt’s Lodge,” I rolled the windows down—the outside air battled with the A/C and the driver probably lowered my Rider Score—and found ourselves at Melvyn’s.

Melvyn’s is an old-school joint. But a high-class joint. A high-class, old-school Hollywood hangout. If you’ve ever read Norman Mailer’s The Deer Park, which is about a fictionalized Palm Springs, you’ll get a feeling for the vibe at Melvyn’s.

I’d asked for a seat outside, but they politely informed me that it was 110 degrees and they’re not currently serving outside. But there’s an indoor patio that’s properly ventilated. They assured me, in their own way, that I would not die. (Though, this was in July, before Delta, so who the hell knows now?)

L’appétit vient en mangeant! So, let the feast begin! A parade of oysters, crabs, and shrimp marched from their seafood tower across the table and into our bellies. Then came the steak Diane, no longer served tableside (Casse-toi, COVID!), a crème brûlée, and a digestif of Pernod. All the while, the martinis kept a-coming. I felt almost normal. I could almost remember the before-times. I had flashbacks to that Thanksgiving dinner at the Golden Peacock in Macau. That might have been the last time I’d eaten at a restaurant. Over 600 days before. Mon dieu, who knew how restorative a drunken feast prepared by a talented chef could be?

And back to the fortress of The Dive. Another Uber, another rolling down of windows, probably another hit to my Rider Score. A drunken swim in the 110-degree night—seriously, it’s always 110 degrees in Palm Springs—and then we turned in for the night.

But now it should be Housewives time! Alas, the record player would have to do. They had the fourth record of the four-volume Miles Davis set, Tune Up. I put on Bag’s Groove. A pretty good Bravo balm. Magnifique.

We woke in a bed that wasn’t our own, in a room hundreds of miles from home, in a dwelling filled with at least 22 strangers. No Anxiety. Gone. We survived the first day, knew we could thrive in the second. We ordered breakfast from Kevin, put on Miles Davis, and remembered who we were. It was like a magician snapping awake a hypnotic. This little oasis in the stifling desert was the perfect hotel to chase away our oodles of COVID fears. To vanquish our anxieties. To give us a pinch of the normal. And after 599 days, I couldn’t have asked for more.

Of course, the following day, we drove home, closed the door, and watched Erika Jayne (allegedly) lie-cry. And we’ve been here ever since. Vouloir, c’est pouvoir.

without vacation
Read The Rest at
fodors.com

2 Seabourn Encore to Return to Service Earlier Than Scheduled

4 In Memoriam: Stanley S. Tollman, Founder of The Travel...

6 The 38 Essential Restaurants in Paris

7 Los Angeles Is the Latest Major City to Require...