Looking to spend 3 days in Chicago but don’t know where to start? Well, this guide is here to help you out!

Chicago is one of the most populated cities in the United States and sits on the shores of Lake Michigan. Known as ‘the Windy City’, Chicago attracts millions of visitors each year and it’s no surprise why.

With its iconic attractions, towering skyscrapers, and scenic views, this city has made it onto many people’s bucket lists.

But how should you spend your 3 days in Chicago? This guide will go through the must-visit sites, how to get around the city, and the best places to stay.

Without further ado, here is the ultimate 3-day Chicago road trip itinerary in 2022 !

How to get to Chicago

Flying is one of the most popular ways to reach Chicago as between them, both airports offer inbound and outbound flights to over 240 destinations across the world. You’ll also find plenty of great deals on domestic flights within the United States too.

If you’re wanting to save some money you can catch a bus or train to Chicago from other major cities in the U.S.

The most popular coach routes are from New York, Buffalo, Dallas, Minneapolis, and Detroit. However, Greyhound also runs 20 express routes to and from major cities and has five locations within the city.

Catching a train is another popular choice, and the best option is Amtrak. They offer routes to over 500 destinations within the United States and Canada, so you’ll easily be able to reach the city.

Many of the coach and bus trips to Chicago often run overnight if you’re traveling a long way, which will also help you save on accommodation costs. 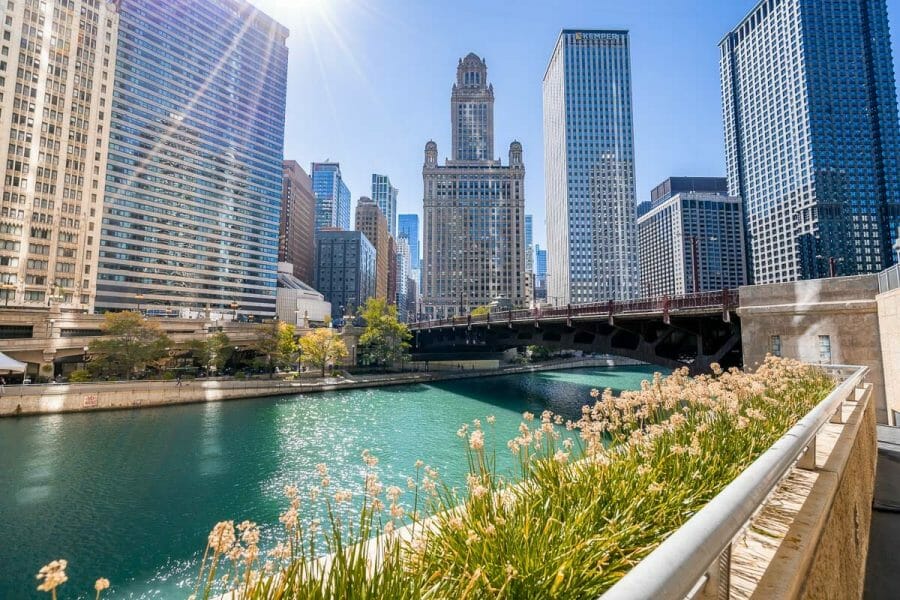 You’ll also find plenty of festivals and sports games to attend in the summer months, but be prepared to pay top prices for accommodation.

If you’d prefer a quieter and cheaper experience, then visiting Chicago during the shoulder season is a great option.

The city’s shoulder season falls between April-May and September-October, and you’ll also find the tourist attractions to be much less crowded.

Although the weather is cooler and you’re likely to see more rain, you can get great bargains on accommodation and transport. 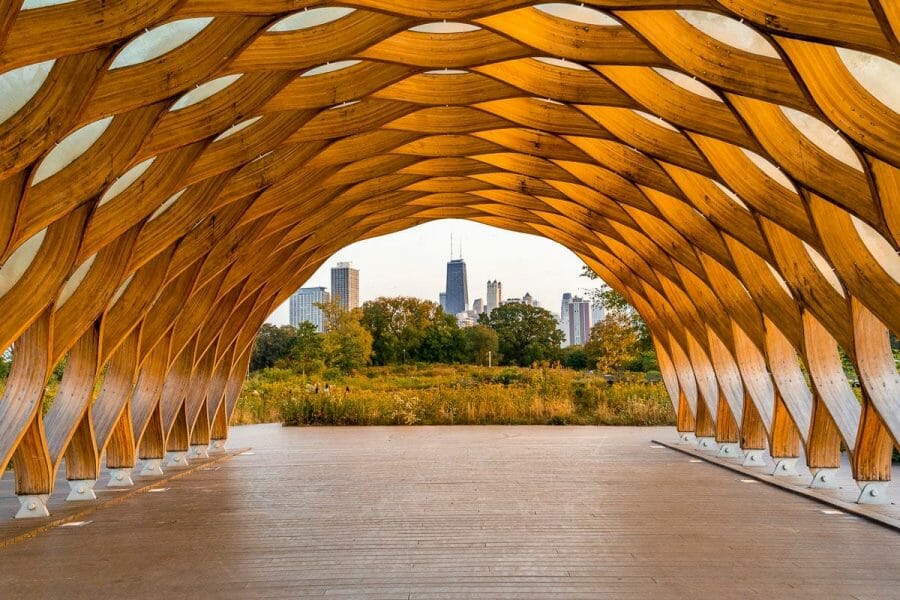 The Educational Pavilion, otherwise known as the Honeycomb in Lincoln Park

How to get around in Chicago

Chicago is super easy to get around as public transport is efficient and runs regularly.

The best way to explore the city is by using the ‘L’ Train. There are 8 colored network lines that will take you to most of the areas and attractions in Chicago. Two of these run 24 hours a day, while the others typically operate between 4 am to 1 am.

You can purchase single standard passes, but it’s cheaper to purchase a one-day or three-day pass depending on your itinerary.

Buses are also a great way to get around as 129 routes run throughout the city. Some of these bus routes run on a 24-hour basis, while others operate until 11 pm or  2 am.

If you’re looking to head out into the suburbs then you can take the Metra Rail.

Taxis can also be found throughout the city but they aren’t cheap, although Uber and Lyft are available here.

However, one of the coolest ways to get around the city is by water taxi. They offer a fast and affordable way to travel along the Chicago River, Lake Michigan, and between tourist attractions.

They do only run between May and September/October though so you’ll need to keep this in mind.

Although you can hire a car and drive around the city center, I wouldn’t recommend it – especially if you only have 3 days in Chicago. The traffic is a nightmare and parking is extremely limited (and very pricy). 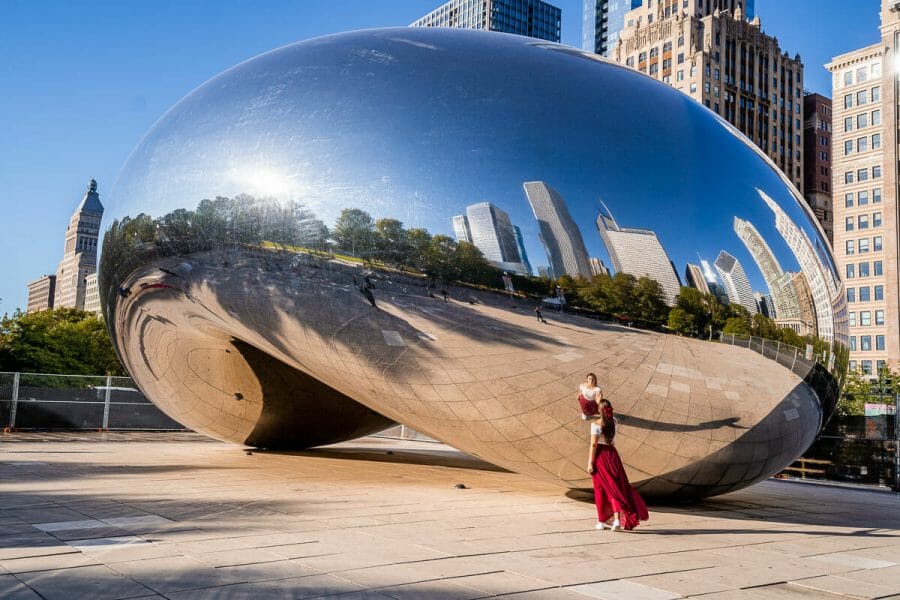 The Cloud Gate (aka The Bean) in Millennium Park

Where to stay in Chicago

There are endless neighborhoods within the city so deciding where to stay in Chicago isn’t an easy decision. So, here is a quick guide to the main areas of the city:

There are plenty of great areas to stay within the city, but these are just a few of the most popular ones. If you’re interested in knowing more about each neighborhood, make sure to read my detailed guide about the best areas to stay in Chicago.

If you’re in a rush, here are my top recommendations for different budgets. 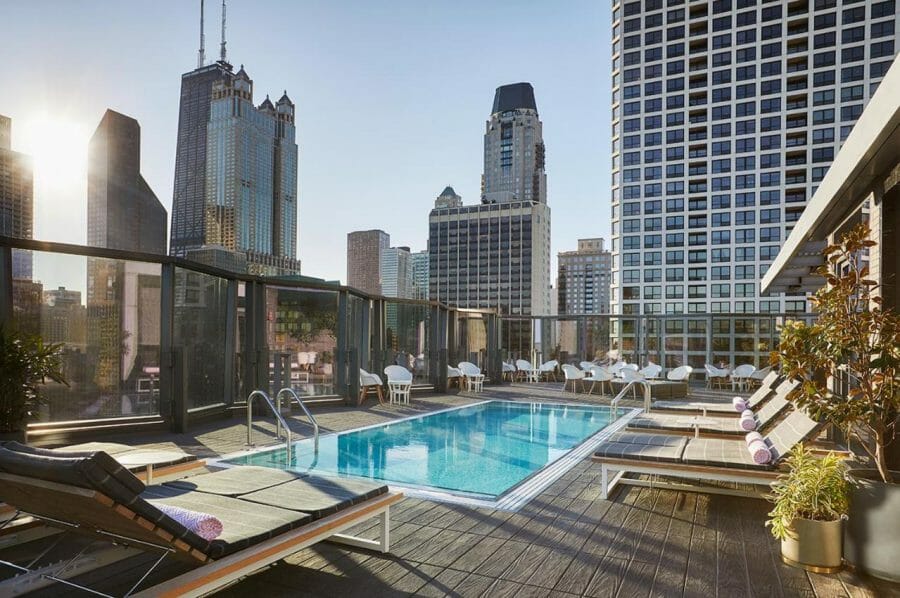 Viceroy Chicago is situated in the scenic Gold Coast area and is just minutes away from the Magnificent Mile and Lake Michigan. This hotel has all the facilities you could need for a luxury stay including a rooftop bar and lounge, a fitness center, on-site dining, and a seasonal rooftop pool. 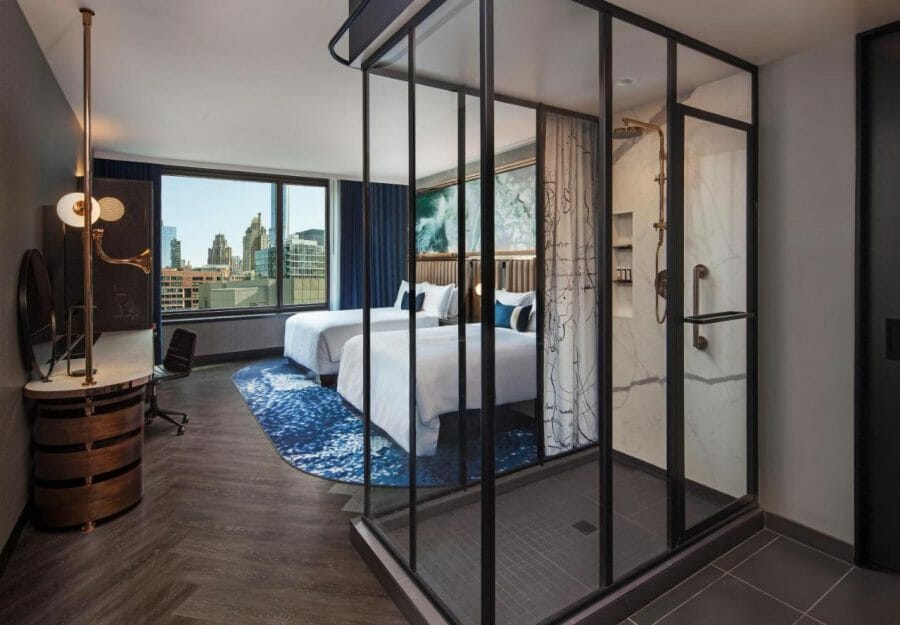 Hotel EMC2 is located in Streeterville and is right by the Magnificent Mile and Downtown Chicago. Millennium Park and Navy Pier are also just 1 mile (1.6 km) away. Not only are the rooms beautiful and spacious, but this hotel also has on-site dining available, a fitness center, and a dry-cleaning service. 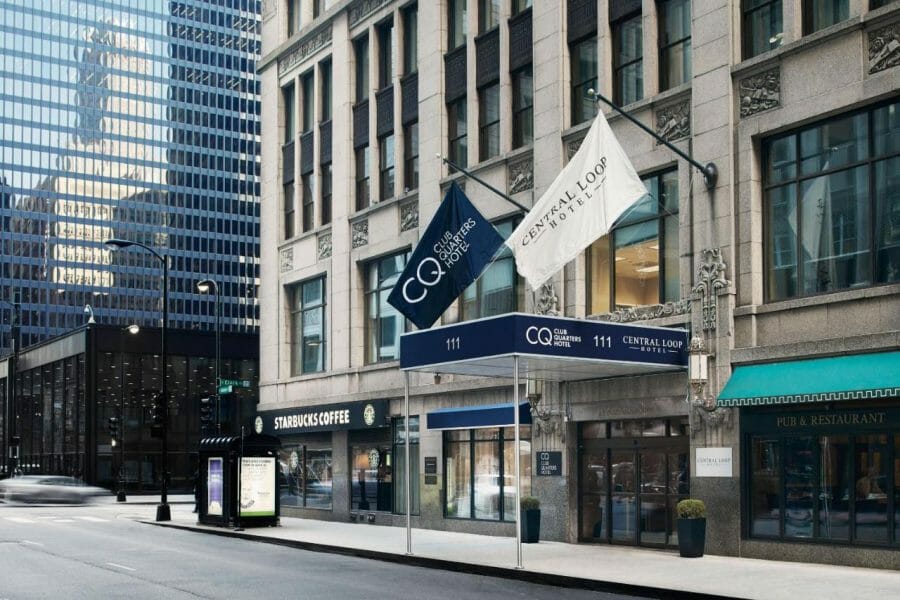 All guest rooms at Central Loop Hotel have custom-designed furnishings and comfortable beds with down duvets and plush pillow-top mattresses. They also include work desks with ergonomic chairs. Complimentary exercise equipment and air purifiers are available for room delivery upon request.

Breakdown of your 3 days in Chicago

Breakfast at ​​Goddess and the Baker

Grabbing a bite to eat at the Goddess and the Baker is the perfect way to fuel your day of exploring. It’s famous for its great food, amazing coffee, and fun treats!

They have a wide selection of breakfast options including yogurt parfait, omelets, bagels, and waffles so you won’t have a problem finding something to your taste here.

There are multiple locations of Goddess and the Baker, but this one is right across from Millenium Park (the next stop on your 3 day Chicago itinerary). You can either have breakfast first thing in the morning or after you’ve visited the park – it’s completely up to you! 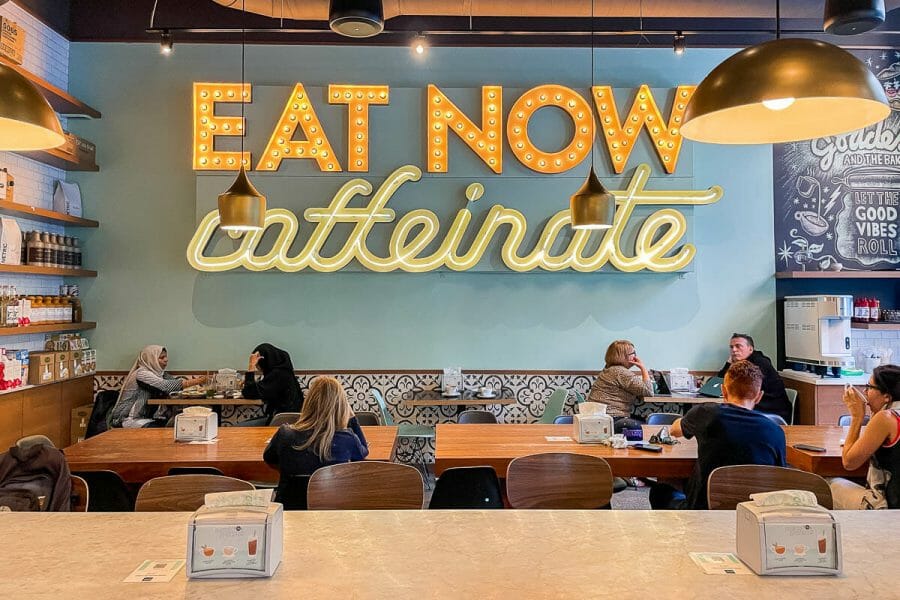 Millennium Park and The Bean

After (or before) breakfast, make your way to Millennium Park which is one of the most famous landmarks in Chicago.

Spanning over 24.5 acres, this park is home to many popular attractions including the Cloud Gate (aka ‘The Bean’).

The Cloud Gate is a public sculpture that was designed by British artist Anish Kapoor. It’s made up of 168 stainless steel plates and weighs in at a whopping 110 tons!

You can walk around the sculpture, take photos, and even go underneath it. Thanks to its reflective surface, it has quickly become one of the most Instagrammable places in Chicago. So be prepared for the crowds as this is one of the most popular things to do in Chicago!

After you’ve had your fill of The Bean, continue exploring Millennium Park. There’s plenty to see and do here including visiting the Lurie Garden, which is a 2.5-acre public garden, or checking out the Crown Fountain which is a work of art in itself! 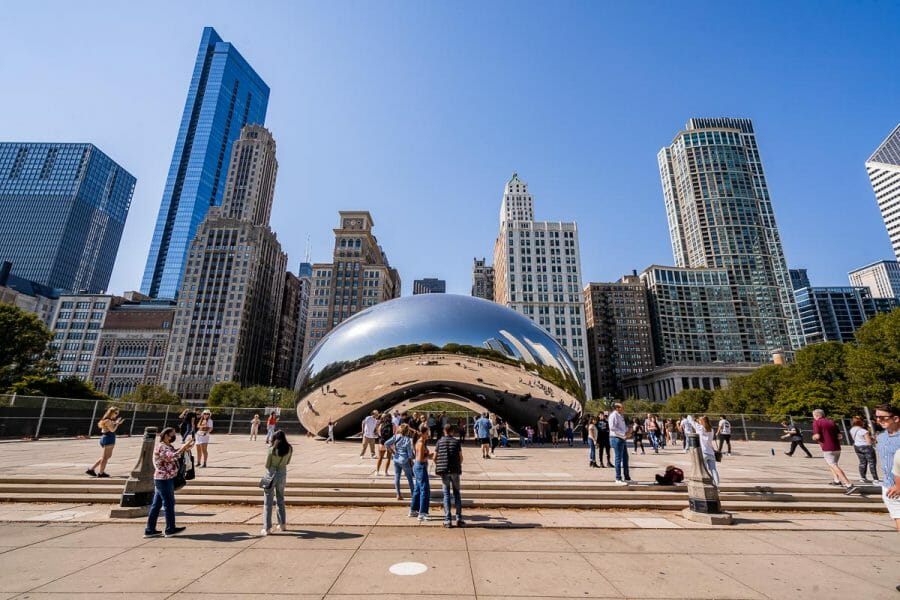 The Art Institute of Chicago

The Art Institute of Chicago is another popular attraction as it’s one of the world’s largest (and oldest) art museums.

Aside from its ever-changing exhibitions, the museum has a permanent collection of around 300,000 art pieces which is pretty impressive.

These ongoing exhibitions include the ‘Of Gods and Glamor’ exhibit, ‘a New View of African Art’, and the ‘Landscape in Light’ exhibit.

The museum attracts around 1.5 million people annually and is a must-visit on your 3 day trip to Chicago.

It’s important to note that the Art Institute of Chicago is closed on Tuesdays and Wednesdays, so you’ll have to time your visit right if you want to visit this spot.

Otherwise, it’s open between 11 am – 5 pm from Thursday to Monday and general admission costs $25 per person.

TOP TIP: In case you want to visit multiple attractions, take a look at the Chicago CityPASS which can help you save 48% or more on the top attractions. It includes access to The Art Institute of Chicago, Shedd Aquarium and SkyDeck Chicago among many other popular sites. 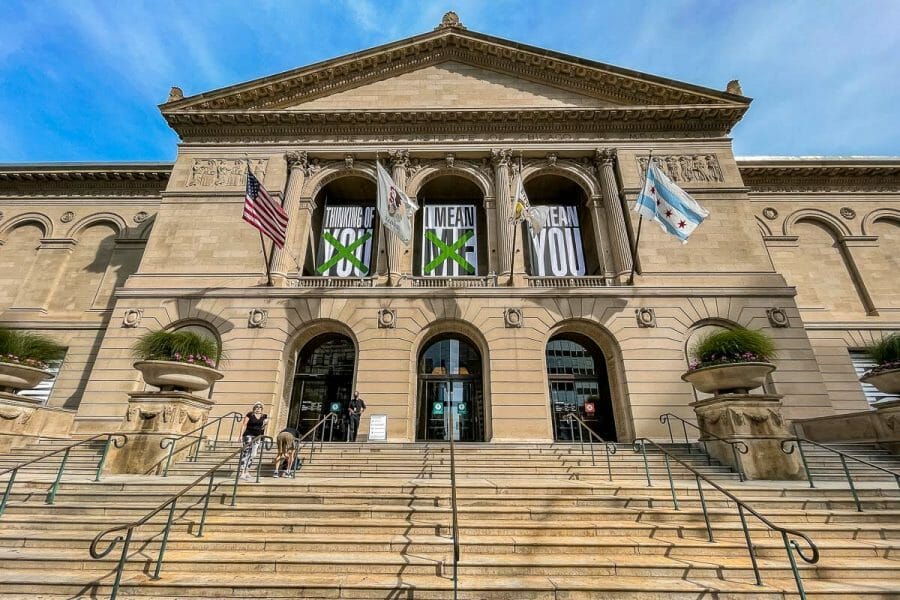 Next up on your 3 days in Chicago itinerary is a visit to Navy Pier, a 3,300-foot-long pier that sits on the shores of Lake Michigan.

It’s one of the most popular tourist destinations in the city and it’s easy to see why with its many attractions, shops, and restaurants.

You’ll find plenty to do here including fairground rides, live music performances, theater productions, and special events. Not to mention the incredible views to be had from the pier itself!

One of the unmissable things to do in Navy Pier is going on a ride on the Centennial Wheel, which is a 200-foot tall Ferris wheel. From the top, you’ll be able to see amazing views of the cityscape and beyond! Since it’s a fairly popular attraction, it’s best to purchase your tickets in advance.

If you’re looking to do some shopping, Navy Pier is also home to a variety of stores selling everything from souvenirs to clothing.

And when you’re ready to refuel, there are plenty of restaurants and cafes in Navy Pier to choose from including the food court which has options to suit all tastes.

My personal recommendation for today’s dinner is Giordano’s. They have multiple locations throughout the city but this one is actually at Navy Pier so you won’t have to wander far.

Giordano’s is home to the best deep dish pizzas in all of Chicago, and you’ll find plenty of tasty topping optio