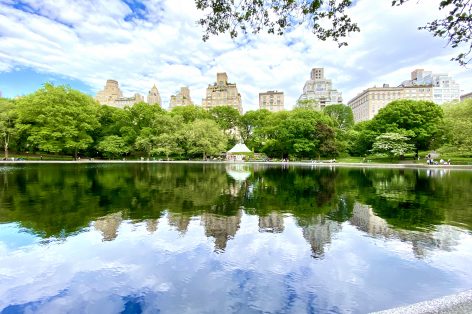 A lake in Central Park

The National Hurricane Center downgraded the storm earlier on Sunday from a Category 1 hurricane.  Henri then proceeded to hit the coast of Rhode Island at 12:15 EDT with sustained winds of 60 mph (96 km/h).

The storm’s tropical-force winds extend up to 125 miles (201 miles) and it could leave as much as one foot (30 cm) of rain in some places, the National Hurricane Center warned.  The NHC also warned that tornadoes were possible across parts of southern New England.

“The biggest problem right now that folks are going to be facing is the water,” said Dennis Feltgen, a spokesman for the National Hurricane Center. “Tropical rainfall comes down heavy and it comes down fast – our biggest concern is the flooding.”

New York City saw record rainfall Saturday.  It was the wettest day in the Big Apple in seven years, the National Weather Service said, adding that the 1.94” (4.9 cm) of rain that fell from 10 p.m. to 11 p.m. EDT was the wettest hour in the city’s history.

“More rain fell in that one hour than any other since record keeping began,” the National Weather Service said in a tweet announcing the record-breaking number.

The Best Bars in West Village

5 We’re Getting Rid of Starred Restaurant Reviews at Eater