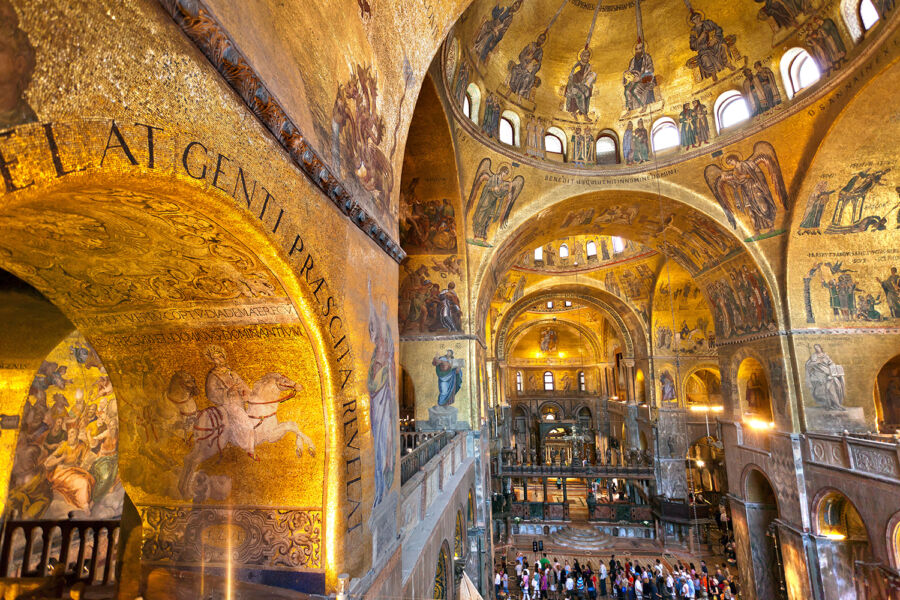 It’s clear that as we, as a society, get vaccinated, we’ll soon be free to travel again in Europe — and it’s more exciting than ever to envision the great sights and slices of culture that await. For me, one of the great joys of travel is having in-person encounters with great art and architecture — which I’ve collected in a book called Europe’s Top 100 Masterpieces. Here’s one of my favorites:

Stand in the center of St. Mark’s Square — the center of Venice — and take in the scene: the historic buildings, the cafés with their dueling orchestras, the sheer expanse of the square, and all the people — Italians on holiday, Indians in colorful saris, and Nebraskans in shorts and baseball caps. Overseeing it all is a church that’s unlike any other in the world — the Basilica of St. Mark.

St. Mark’s is a treasure chest of wonders acquired during Venice’s glory days. The facade shows off the cosmopolitan nature of this sea-trading city that assimilated so many different cultures. There are Roman-style arches over the doors, Greek-style columns alongside, Byzantine mosaics, French Gothic pinnacles on the roofline, and — topping the church — the onion-shaped domes of the Islamic world. The gangly structure has been compared to “a warty bug taking a meditative walk” (Mark Twain) or “a love-cluster of tiara-topped ladybugs copulating” (unknown).

One of the facade mosaics depicts the scene when the body of St. Mark — the author of one of the four gospels in the Bible — was interred on this spot. In 1063, this church was built over Mark’s bones. As Venice expanded, the church was encrusted with precious objects — columns, statues, and mosaics — looted from their vast empire. Their prize booty was four bronze horses, placed in the center of the facade. It’s little wonder that the architectural style of St. Mark’s has been called “Early Ransack.”

When you step inside St. Mark’s Basilica, the entire atmosphere takes on a golden glow as your eyes slowly adjust to the dark. The church is decorated, top to bottom, with radiant mosaics. It’s as intricate as it is massive. (Imagine paving a football field with contact lenses.) They tell the entire story of Christ and the saints in pictures made from thousands of tiny cubes of glass (with gold baked inside) and colored stone. The reflecting gold mosaics help light this thick-walled, small-windowed, lantern-lit church, creating a luminosity that symbolizes the divine light of heaven.

As you explore deeper, you’ll discover the church is filled with precious and centuries-old objects: jewel-encrusted chalices, silver reliquaries, and monstrous monstrances (for displaying the Communion wafer). An urn holds the (supposed) holy DNA of St. Mark. The priceless 1,000-year-old Golden Altarpiece is a towering wall of handcrafted enamels set in a gold frame and studded with 15 hefty rubies, 300 emeralds, and 1,500 pearls. Exotic objects like these date from an era when Venice was almost as oriental as it was European.

The church’s symbolic message culminates at the very heart of the church. There, up in the central dome, Christ reigns in the starry heavens, riding on a rainbow. This isn’t the agonized, crucified Jesus featured in most churches, but a vibrant, radiant being gazing solemnly down, raising his hand in a blessing, as the Pantocrator, or Ruler of All. His grace radiates through a ring of saints to the altar below. As the central spot in the church, the Pantocrator dome is the symbolic center of the Venetian universe itself, with Christ blessing it all. God’s in his heaven, the faithful are on earth, Venice is central, and all’s right with the world.

Standing under the dome of St. Mark’s, it becomes clear: Among Europe’s churches, there are bigger, more historic, and even holier churches. But none are more majestic than St. Mark’s Basilica.

Flights from Paris to Japan (Tokyo) for €383

4 The Church Bar & Restaurant, The Perfect Dublin One...

6 Warm up with a Japanese favourite: Canberra’s best ramen

7 21 Questions to Ask When Interviewing for Restaurant and...